Ah chia. You and I meet again.

I've just spent the last 10 minutes searching YouTube for the clip I will forever think of every time I hear the word. Sadly it must be such a random part of the Wayne's World movie that nobody's put it up for my enjoyment! Anyway, Benjamin Kane is flicking through the TV channels, and after the clapping lamp ad, he flicks to this:

So I'm constantly singing in my head "clap on, clap off, the clapper! ch-ch-ch-chia!" And it will not go away.

'90s movie obsessions aside, the kind people over at Baker's Delight sent me some of their new chia bread to try recently, and once I stopped singing the song and explaining to the courier why he was delivering bread to me, I ripped a piece out and buttered it. Forget about the fact I actually had to cook with it

Anyway, I'm a huge fan of chia - as I mention in this post where I make banana chia muffins. Sadly, I'd have to sell Veggie Baby in order to fund one banana these days so I've had to use different ingredients in them.

With the suggestion that I might like to make an Australian recipe from the bread, I immediately had two ideas: 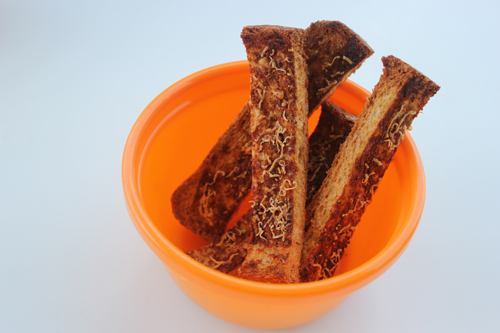 Little Aussie kid toast rusks! A smidgen of Vegemite, a sprinkle of cheese on the wholemeal chia bread, and into a low oven until they're hard. NOM. 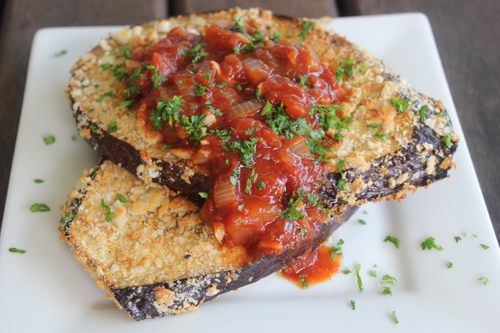 And the rest of the bread I left out overnight (covered) until it dried, then whizzed them in the food processor to make breadcrumbs. I then egged and crumbed eggplant slices and baked them at 180C for about 20-30 minutes until crispy on the outside and cooked through. then I smothered them in homemade chilli-tomato jam.

I normally add spices and things to my breadcrumbs, but I left these plain so as not to compete with the jam. To be honest, the breadcrumbs didn't really need it. I especially like the extra crunch from the chia seeds, that pop a little when you bite into them. Delicious and healthy... oh chia is there anything you can't do?

Thanks to Baker's Delight, I'm giving away three prize packs that include a packet of chia seeds, a $5 voucher to try their bread, and a medium-sized chia-branded singlet. Just leave a comment below and tell me what Aussie recipe would you have made?

The giveaway is open to Australian residents only, and will end at 5pm on Tuesday October 18. Random.org will be used to choose three winners, who will be notified by email, so make sure I can contact you somehow!

And for those playing along at home:

Directions:
1. Saute the onion, garlic and ginger over low-medium heat until translucent, about 5 minutes.

3. Add tomatoes, vinegar, sugar, salt and pepper and bring to the boil.

4. Reduce heat and let simmer about 20-30 minutes, long enough to get thick and jammy. Oh man, it's good!

You can read more about the history of the chia seed, the Kimberley region in which it is grown, and chia farming here.

Disclosure: I was given two loaves of bread to try and the giveaway stuff for you guyses. That's all, folks!
Email ThisBlogThis!Share to TwitterShare to Facebook